7 Red Flags to Watch for During a Job Interview 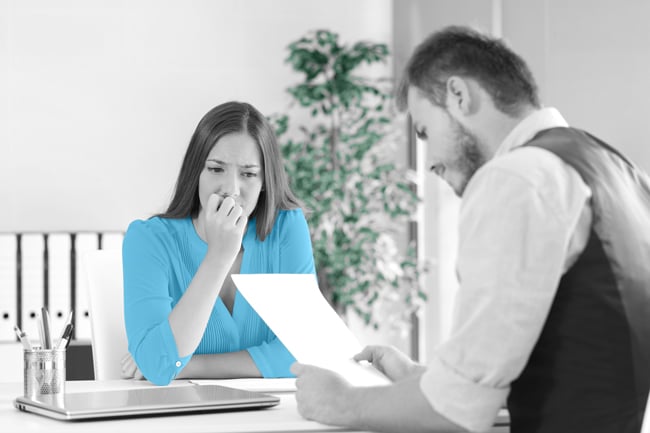 No matter how much you feel you glean from an interview as an employer, you still take a risk each time you have to fill an opening with a new employee. There is no possible way to fully understand things like personality, attitude, and work styles with only an application and a short interview as your guides.

You’re unlikely to find the right candidate without additional ways to judge their character or strategies to choose which questions to ask. Generally, if someone wants the job, they are on their best behavior and will give you the answers they think you want to hear. Even for candidates whose truthful story is perfectly sufficient, it almost seems natural to provide the best answer to the question, rather than being truly honest and risking the employment opportunity.

Every candidate wants you to think they are the best person for the job. This is a strike against you as the person hiring, right from the beginning. So, how do you tell whether your potential employee is telling the truth or embellishing details, or even if they’re a good fit for your current office environment?

These are not things any candidate is likely to reveal about themselves in a job interview, so reading their body language and behavior are your best clues about their overall character. And while you don’t want to make blanket assumptions, you can use this “sixth sense” to weed out the candidates that don’t fit the bill from the true prospects. Keep in mind that you can build on the positive attributes you pick up on in the interview, but the negative ones may be enough to seal the non-deal. This is where taking notice of red flags can save you the time, money, and hassle of a bad hire.

Who would know better about the common signals of an unlikely candidate for the job than those who meet with potential employees on a daily basis? Outsourcing to a staffing agency or third-party recruiter can save you money in the long run, thanks to savings on ineffective hiring principles that can leave you repeatedly hiring the wrong candidates.

If you want to keep your hiring in-house, however, here are some typical red flags that point to the type of characteristics you likely don’t desire in an employee:

When candidates won’t give you eye contact, or divert their eyes to the side quickly, this means one of two things. They aren’t telling the truth, or they have issues with confidence. Either way, this could mean they’re not a good candidate. Lack of confidence can mean they won’t have what it takes to succeed or progress in the position, and an indicator of dishonesty may mean they have something to hide.

When a candidate can’t seem to apply a broader concept under discussion with a specific example in their work history, you know that they either don’t understand the concept, or they are being dishonest about the types of work they have done in the past. Behavioral and technical interview questions are great for alerting you that a candidate is trying to beef up their work experience. If they can’t back it up with examples, they probably didn’t do it.

In no way, shape, or form is gossiping okay in a professional environment, especially in a job interview. If a candidate gossips about past managers or employees, you can rest assured that they will not hesitate to start drama in the workplace.

Background check issues that you address in an interview should be met with transparency as opposed to defensiveness, dismissal, or lack of ownership. The presence of a criminal record or other adverse information on a background screen doesn’t necessarily have to be a deal-breaker as long as your candidate isn’t trying to pass ownership to others involved, such as law enforcement, the courts, or a regulatory agency. On the other hand, having a story that really pans out and with a good outcome due to a solution-based approach by the candidate can be a sign of resilience.

Using a reputable background screening company, like AccuSource, can take the worry out of validating and interpreting employment background check reports. Accusource is your one-stop-shop for accuracy, speed, and reliability.

Poor listening can sometimes be due to nervousness, but if a candidate asks questions you’ve already answered (instead of repeating back and verifying), you can take an educated guess that they won’t be good at following directions or understanding the true purpose of a big project. Another characteristic this red flag may indicate is a lack of respect for others’ time. This is not a trait of a team player and can cost your company money and wasted time, as well as reduced morale in other employees.

Not coming up with questions for a potential employer can indicate that the potential employee lacks an understanding of the role they’re applying for. This may mean that they aren’t willing to do what it takes to clarify and fulfill the position’s expectations. In addition, not asking questions can indicate a lack of ambition or the ability to dig deep to take on new tasks or find solutions for problems.

No one likes a braggart or a “one-upper”. You know the one. No matter what story you tell, they have a bigger and better one. When someone feels the need to boast about their accomplishments, the accomplishments either don’t exist or they are being embellished. Ironically, bragging is often an indicator of insecurity and lack of confidence, both of which are undesirable in a candidate. This type of overcompensation can also mean that a candidate is trying to fabricate what you want to hear.

When it’s time to hire your next new employee, knowing these seven red flags for undesirable traits can inform you in ways that go beyond the handshakes and limited conversation of an interview. Rather than dismissing your gut feelings entirely, consider how these tell-tell signs can help you become a more intuitive and effective hiring professional.