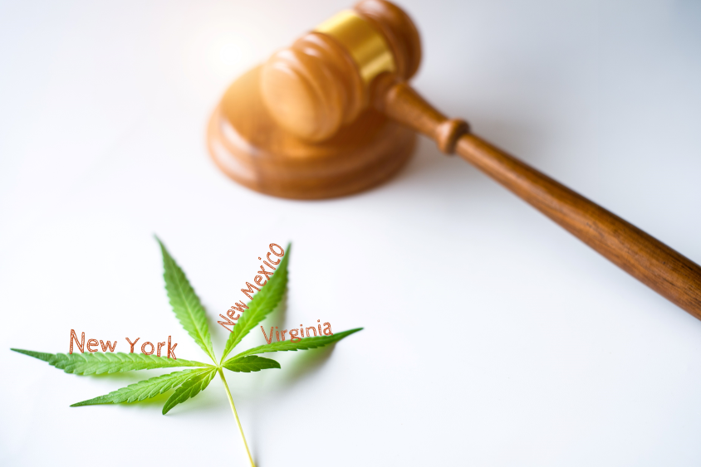 April is the month of 420, which is fitting as three more states have legalized recreational marijuana. First, the State of New York passed the Marihuana Regulation and Taxation Act (Senate Bill S854A), legalizing the recreational use of marijuana by adults. One of the most common questions when new marijuana legislation is enacted involves its impact on employers. To an extent, New York employers are permitted to maintain their drug-free workplace programs. For instance, employers can prohibit the use or possession of marijuana onsite, during work hours, and while an employee is using an employer’s property, such as equipment. While the Act built in a federal safe harbor, employers are prohibited from taking adverse action based solely on the theory that marijuana is illegal on the federal level. Instead, an employer can take adverse action based on a federal illegality argument if it is governed by a federal or state law that requires it to do so or if compliance with the Act would risk a federal contract or federal funding. New York employers may also prohibit workplace impairment with the law helpfully listing specific articulable symptoms that may show impairment. While not related specifically to employment, driving under the influence of marijuana is still prohibited under the law.

New York employees should remain cautious. Effective immediately, the Act prohibits employers from discriminating against employees who have used or possessed marijuana legally while off duty and outside of the workplace with limited exceptions. The Act also creates a private right of action for employees who claim that they have been discriminated against for their legal use or possession. Testing for marijuana is permitted, but its usefulness is in question since the Act does not allow adverse employment action against an applicant or employee based solely on a positive marijuana test. With the additional requirements in New York City related to marijuana, New York employers should closely review their drug screening programs.

Not far behind New York, New Mexico’s governor signed two bills into law on April 12, 2021. One bill legalizes the possession and use of recreational marijuana while the other bill permits the expungement of certain criminal records related to marijuana. The Cannabis Regulation Act (House Bill 2) allows the use of recreational marijuana by adults age 21 and older. The law differentiates the rights of cannabis users based on whether they are at home or in another private setting versus when they are in public. An adult who is 21 or older can possess more than 2 ounces of marijuana, 16 grams of cannabis extract, and 800 milligrams of edible marijuana if it is stored at home or out of public view. The Act also allows each individual to keep up to 6 mature marijuana plants at home, but the household cannot have more than 12 plants total. In public, an individual is a bit more limited, allowed to possess up to 2 ounces of cannabis. Any use of marijuana in public, such as smoking, vaping, or other ingestion, must be done so in a “cannabis consumption area.” Those who violate the restrictions on public possession and use of marijuana can face up to $50.00 in fines. The sale of recreational marijuana will begin a year from now in April 2022, but the other provisions take effect on June 29, 2021.

One of the issues we have seen with some marijuana legislation is that it does not specifically address employment issues. However, like New York, the New Mexico Cannabis Regulation Act does address how employers are impacted. Employers are specifically permitted under the Act to implement, continue, and maintain drug-free workplaces. For example, employers may maintain drug-free policies if the failure to do so may result in the loss of federal contracts or funding. An employer can also prohibit or take adverse employment action against an employee who is impaired or possesses intoxicating substances at work. While New Mexico employers are permitted to implement or maintain zero-tolerance programs related to the use of marijuana by employees, applicants are not specifically addressed. Additionally, if an employer is subject to a collective bargaining agreement, the Act also will not interfere with that agreement.

New Mexico’s governor also signed a bill that amends The Expungement of Certain Criminal Records Act, providing for the expungement of arrest and conviction records of certain marijuana offenses that will become legal as of June 29, 2021. It also expunges lesser offenses as if recreational marijuana had been in effect when the offense occurred, whether or not the individual was convicted. Eligible records will be expunged automatically after 2 years has passed from the date of conviction or the date of arrest if no conviction occurred. For those who were arrested or convicted as a minor, the records will be expunged at the earlier of 2 years from the date of the conviction or arrest or when the minor turns 18 years old. Those who are currently incarcerated for marijuana offenses may also receive a reprieve under the expungement law.

Finally, Virginia has joined New York and New Mexico in legalizing recreational marijuana, which becomes effective July 1, 2021. Adults who are 21 and older will be permitted to use marijuana, possess up to 1 ounce of marijuana, and grow up to 4 plants at home. Retail sales may lag a bit with Virginia having until July 1, 2024 for establishment. The law includes some restrictions. Eligible adults may possess marijuana in public but cannot use it in public places. Driving under the influence of marijuana is still illegal in Virginia for both driver and passengers. Differing from New Mexico, Virginia’s law does not provide specific protections for employers related to the recreational marijuana legalization and the workplace. As is popular with similar laws, Virginia will implement an expungement process where eligible marijuana crimes will be automatically expunged by July 1, 2026. It should also be noted that Virginia also amended its medical marijuana law recently, which will be discussed during our Mid-Year Compliance webinar to allow this blog post to focus on recreational marijuana. If you would like AccuSource to provide a complimentary review of your current background screening compliance program, please contact us at marketing@accusource-online.com.