In the Weeds…Again: House Votes Yes on Legalized Marijuana 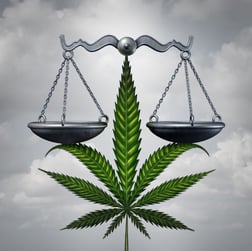 Marijuana has taken a step closer to being legalized on the federal level through the Marijuana Opportunity Reinvestment and Expungement Act, or the MORE Act. In a historic moment, the House of Representatives voted yes to H.R. 3884 on December 4. Not only is this the first time a marijuana legalization bill has made it to the floor, it is also the first time such a bill has been approved by a portion of Congress. The MORE Act officially passed to the Senate on December 7 where it was read twice then sent to the Committee on Finance for review.

If made law, the MORE Act will decriminalize marijuana by removing it from the Controlled Substances Act schedule. The Act will remove criminal penalties for those who manufacture, distribute, or possess marijuana. It also will require federal court to expunge certain federal convictions as well as the re-sentencing of offenders who are currently under supervision for marijuana-related offenses.

The MORE Act will also allow states to set their own retroactive policies and create a 5% federal sales tax on marijuana products. On a more practical note, the Act will replace references to “marijuana” and “marihuana” with “cannabis.” If the MORE Act becomes law, it will establish a trust fund to support programs and services for communities impacted by the War on Drugs. Additionally, those who apply for federal public benefits will not be denied those benefits due to cannabis-related conduct or convictions. The Act would also extend similar protections to those covered by immigration laws.

AccuSource will provide updates as the bill continues to move through Congress. If you would like AccuSource to provide a complimentary review of your current background screening compliance program, please contact us at marketing@accusource-online.com.