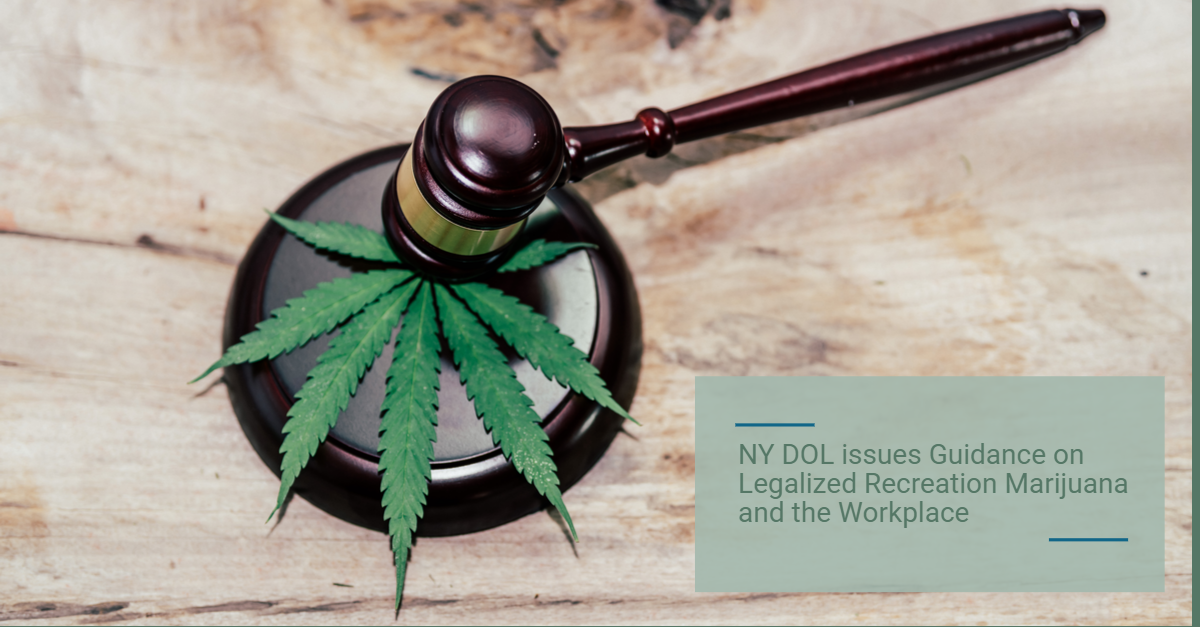 AccuSource has previously discussed the legalization of marijuana in New York for recreational purposes. The New York Department of Labor (“NY DOL”) recently issued guidance and a set of frequently asked questions to address how legalization impacts employers. The guidance, titled “Adult-Use Cannabis And The Workplace – New York Labor Law 201-D,” provides direction on the Marijuana Regulation and Taxation Act (“MRTA”), which itself became effective on March 31, 2021. The MRTA states that marijuana is a legal consumable product when used in compliance with New York law.

The baseline rule is that employers cannot discriminate against employees based on their lawful use of cannabis when that use occurs outside of the workplace, outside of work hours, and where the employee does not use the employer’s equipment or property. The FAQs also provide a reminder that only legal use of cannabis by adults 21 years or older is protected by the MRTA.

The guidance explains that the MRTA does allow for some exceptions. An employer may take action where required by state or federal statute, regulation, or ordinance, or other state or federal governmental mandate. The employer is also not expected to violate federal law or risk a federal contract or federal funding.

An employer can also take action against an employee who, while working, shows “specific articulable symptoms” of marijuana impairment. The impairment must decrease his or her performance of duties or must interfere with the employer’s obligation to provide a safe and healthy workplace. While the guidance does not define “specific articulable symptoms of impairment,” it can be viewed as “objectively observable indications” that an employee’s performance has decreased. However, the guidance warns against considering symptoms that could be the result of a covered disability, which could lead to a discrimination claim by the employee. It is also important to note that the smell of cannabis on its own is not enough to justify employment action.

An employer is permitted to prohibit cannabis during work hours, including during meal breaks that are taken away from the employer’s property. It can also ban the possession of marijuana at work, which includes company vehicles during off non-work hours.

Drug testing for cannabis is generally prohibited. The guidance specifically states that a positive marijuana test cannot be used by an employer as proof of impairment because currently no test for current marijuana impairment exists. An employer may be tempted to argue that they can test for marijuana because it is illegal under federal law. However, the guidance prohibits such testing. The MRTA does permit an employer to screen for marijuana if federal or state law requires drug testing or makes it a mandatory requirement of the position.

While we will not summarize all information provided in the guidance, be aware that it also includes information about workplace policies, immigration or citizenship status, and other topics. It is also important to note that the MRTA applies all public and private employers in New York. We highly recommend that if you have applicants or employees in New York State that you review the guidance closely. If you would like AccuSource to provide a complimentary review of your current background screening compliance program, please contact us at marketing@accusource-online.com.