The Green Rush: Medical & Recreational Marijuana Legislation in the US

Medical Marijuana is Legal in 30 States, Recreational Use is Legal in 9 States; All Use Remains Illegal Federally

Pending legislation would make medical marijuana card holders a protected class and prohibit employers from discriminating against them based on the results of positive THC drug tests. Click here to read the full story.

The current of wave marijuana legislation sweeping the US has many employers wondering how the new laws may affect their rights pertaining to the drug screening of employees and potential job candidates during the hiring process. While 30 US states and the District of Columbia have legalized medical marijuana, and 9 states and District of Columbia have legalized marijuana for adult recreational use, the federal government still considers marijuana to be a schedule I drug. Schedule I drugs are defined as “drugs with no currently accepted medical use and a high potential for abuse.” These include heroin, LSD, marijuana, ecstasy, methaqualone, and peyote. This conflict between state and federal law raises possible issues for federally regulated jobs, including any position that is regulated by the DOT (Department of Transportation).

Oklahoma is the latest state to pass legislation legalizing the use of marijuana for medical purposes. On Tuesday, June 26th, 2018 State Question 788 was passed via ballot measure, giving Oklahoma residents the right to obtain a medical marijuana license with the signature of a board-certified physician. The legislation does not currently have an enacting date.

Under State Question 788, licensed medical marijuana patients will be allowed to possess up to eight ounces of marijuana in their residence with no specified qualifying conditions outlined other than a prescription from a medical doctor. Dispensaries, commercial marijuana growers, and processing operations will be required to obtain a license from the state, and municipalities do not retain the right to pass local laws restricting medical marijuana dispensaries.

According to Current Compliance, the new Oklahoma legislation  prohibits employers, landlords, and schools from taking adverse action against a person for being a medical marijuana license holder “unless failing to do so would cause a loss of benefits under federal law.” In the cases of safety-sensitive employees whose positions are regulated by the DOT - pilots, school bus drivers, truck drivers, train engineers, subway operators, aircraft maintenance personnel, transit fire‐armed security personnel, ship captains, and pipeline emergency response personnel, among others – the DOT has made it clear its Drug and Alcohol Testing Regulation “does not authorize ‘medical marijuana’ under a state law to be a valid medical explanation for a transportation employee’s positive drug test result.” Employers in Oklahoma also retain the right take adverse actions against employees based on possession and/or use of marijuana in workplace, regardless of cardholder status.

Growing Acceptance Among the General Public

A recent Pew Research poll showed that 61% of Americans favor legalization of marijuana and as states that have already legalized the use of cannabis in one form or other continue to report either neutral or positive results, employers can expect this figure to rise. While employers often retain the legal right to screen for any substance designated as illegal under federal law, there is a growing trend among employers in states where cannabis has been legalized to consider removing tetrahydrocannabinol (commonly known as THC,  the principal psychoactive constituent of cannabis) from their standard employment screening test panels for non-regulated positions.

Although the wave of state cannabis legalization seems to be growing along with the general public’s support of it, Attorney General Jeff Sessions has announced the Justice Department may increase enforcement in states that have legalized the drug. It remains to be seen what affects this will have on employers and the hiring processes in these jurisdictions. 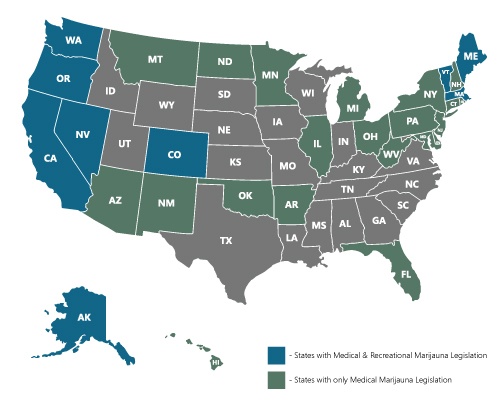 Is Cannabis Legal in Your State?

The following is a comprehensive list of all states that have passed some form of marijuana legalization as of June 3rd, 2018:

States with only Medical Marijuana Legislation:

States with Pending Marijuana Legislation in 2018

With laws involving legalized marijuana use continuously growing and evolving, it’s more important than ever for employers to have a reliable partner  to help  mitigate risk and provide ongoing compliance support. AccuSource’s drug testing solutions focus on meeting your unique company policies and drug-free workplace obligations while helping your organization maintain compliance with applicable regulations. Click here for more information on our extensive drug screening solutions.